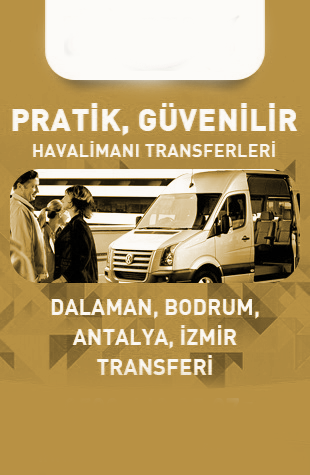 Dalaman Airport is 90 kilometers from Marmaris. Depending on traffic intensity, it can last between 1 hour and 1 hour 30 minutes. It will also be possible to see the green areas and recreational facilities along the road route.

Most of the excavations that have been conducted show that the history of Marmaris dates back to BC. The border of Marmaris and its surroundings is very indented, with its well-preserved villages, harbors and the most conspicuous place where the Mediterranean and Aegean marine are joined, this region has become an important point of connection between Asia, Europe and Africa. Because of this position, it was confronted with invasions of cities that were far from the coast.

According to some sources, some nomadic tribes settled on the edges of Aegean, previously called Finike, from Karya.

This region extending from Marmaris to Ephesus was named Karisa for the name of Karisa Avr, the grandson of Sesif, who ruled and settled together with the Lelegites. It is also reported that this locality was superior to this tribe in the first weeks, while the other hand, which had two handles with shields, also dominated. This tribe has come and settled in the other place of Kar, the grandson of Inakuos, who ruled "Argos" long before. Hereafter, this area began to be referred to as KARYA in his name.

The new colonies: Eolans, Ionians, Dollars, Persians, Meccans, Syrians, Romans, Byzantines, Seljuks and Ottomans were dominant in the Scythians, ruling the Egyptians who had a short time in Karya throughout the Marmaris Datei.

The name of Marmaris: The Seljuks rule starts in 1010 and the first settlements are established and named after MERMERİS. The name MERMERİS was translated into Italian (Latin) Marble / Marmaris during World War I and was used intensively and then became official with the Republican era.

The caravanserai was built in 1545 in the name of Süleyman the Magnificent.

Taşhan was held at the time of the sultan's time in Rhodes.

Ibrahim Agha Mosque was built in 1789 in the vicinity of Mengenlizade Ibrahim Agha.

Osman and Murat Baba Tomb do not have children and they visit here and give a feast, they want to get pregnant, they are in front of Marmaris Security Directorate

Marmaris Castle is at the top of historical places to be seen in Marmaris with its prime location and magnificent scenery. Dated BC 1044